Have you noticed that HVDN has not posted much about DMR or even things relating to the different digital voice modes for a while?    Did you look closely at the photo above for some laughs?

Our focus has been on community growth and awareness via the massive June Hudson River Radio Relay event, a mini QRP HVDN field day, helping to support the USMA at West Point triathlon via APRStt this past August and most recently, spending the day at the Old Rhinebeck Aerodrome to support the OMARC K2A effort.

Plus, with a new weekly commitment to support UNDR Net, there has not been much free time to do much else this summer as HVDN prepares for a series of fall season events.

A reminder from Brian W2BRM today that we have not chatted in a while, made me think I should go find something interesting to write about related to Pi-Star as I try to find the time to do a short video about a duplex hotspot to be included in Pete N2MCI's upcoming presentation about the basics of hotspots to the OMARC club coming up in a few weeks time.

Many people are afraid to touch certain buttons in Pi-Star, but I am not one of those.  Most people use a hotspot to just provide communications for themselves which means your hotspot is in private mode and only lets a radio programmed with your DMR ID to use your hotspot.

If you click the button under "General Configuration" from private to public, here is what will happen. 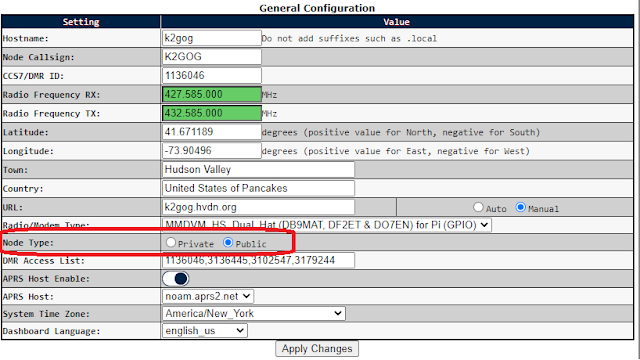 Up until recently, changing to a "public" hotspot would allow for anyone to use your hotspot.  This is helpful at public events as an example if many people have a DMR radio and it makes sense for them to all be on one hotspot for internet communications, while local use can take place via a standard simplex channel.

If you want anyone to be able to use your hotspot, leave the "DMR Access List" box blank.

Alternatively, you can add a list of DMR ID's separated by a comma which would allow only your closest trusted friends to also use your hotspot.

Be sure to remember to hit "apply changes" when adding or deleting DMR ID's.

Now, lets say your club has a DMR repeater that is managed by a Pi-Star interface on your favorite DMR network like Brandmeister or TGIF.  Using this feature could be helpful to ensure that only members of your club are permitted to use the DMR repeater instead of anyone else.

While this can be considered exclusionary and not the best way to portray amateur radio, this feature may be helpful to help promote the use of certain talk groups on a repeater rather than a hotspot. Should an issue happen where preventing a specific user is needed, this feature can permit that also.

There are many ways this feature can be used, so feel free to share some comments below on how you may wish to use this or not.

Learning about SDR with Rick + Get ready for the Kraken!!!

Software Defined Radio is eating the world.  SDR devices have become common place in both the amateur radio and electronics hobbyist world f... 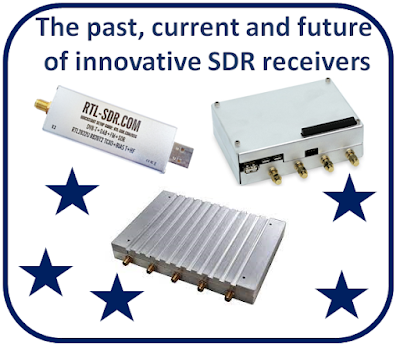