The Official "NOT" Review of the Alinco MD-5 Series

The Alinco MD-5 series of DMR radio first appeared as a "Coming Soon" model in 2017.

Not long ago, official "for sale" release dates were announced by vendors such as GigaParts, Universal Radio and DX Engineering as being late October 2018, early and late November 2018.

Some vendors made a pre-order wait list available to help understand product demand and guess what?


The first Alinco MD-5TGP's have not only started to appear in the United States in late September, but have already sold out!

First is the worst, second is the best?

HVDN has been lucky to secure one of the first batch of radios and will be a source of  a detailed review inside and out as we did with the TYT MD-UV380 Part 1 and Part 2.

However, we will not release this until it is supposed to be officially for sale later this month or possibly early November once market supply of the product is stable and potentially available to everyone.

Lately in the news, there has been an FCC ruling that states:


"Two-Way VHF/UHF radios may not be  imported, advertised, or sold in the United States unless they comply with the commission's rules"

Moreover, this also pertains to the actual users of these radios as well.  The full text of  FCC Public Notice DA-18-980 can be found here. 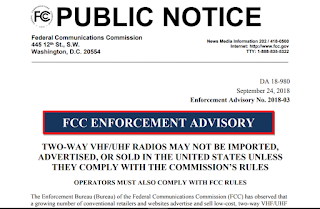 HVDN wants to focus on being purely neutral and objective and takes no political leanings, but this FCC ruling is related to the long list of Chinese imports affected by the 1,333 product categories reduced from a much larger list proposed in Docket Number USTR-2018-0026.

Where could I NOT get one?

Based on some vendor polling the day this article was posted, at least 350 units of Alinco's MD-5TGP have been sold in the US and were imported directly or through some other means rather than the official distribution channels most vendors usually adhere to.

So, how were these radios imported into the United States and able to be sold to amateur radio operators is the big question.


Give a listen to some of the popular DMR talk groups and chances are that you might just hear someone using one of the 350 or so radios that have supposedly already been sold in the US.


There have already been a few people in the Ohio, California and Texas areas that have made it known that they have one of these radios "On The Air", but do not seem to really know what they have or do they?

Impacts on the US Amateur Radio Community

Even though Alinco is a Japanese company, there are Chinese origin components and manufacturing  related to the Alinco MD-5 and thus affected not only by impending tariff laws but also by  US law on what equipment is permissible to be operated by an amateur radio operator within the amateur radio spectrum in the United States right now as of October 4th 2018.

Is this one reason for the delay from manufacturer to distribution to re-sellers and finally into the hands of end users?


Third is the one with the hairy chest!

The amateur radio punchline to the rhyme is that right now it is:

100% illegal to use the Alinco MD-5 by amateur radio operators in the United States because even though it has FCC certification, it is not Part 15 type accepted and able to be used under Part 97 rules.

This radio and many others like it are capable of transmission outside the amateur radio spectrum making them "technically" only operable by those with a commercial license.

Users covered under an umbrella license such as those for public safety, schools, businesses or some other organization that has permission to operate on certain licensed frequencies are not amateur radio related, so why are amateur radio vendors selling this radio to those not properly licensed to transmit with it?

Even if you are one of those people who hold a "General Radio Operator License" or "GROL", that will not allow you to use this radio currently on amateur radio frequencies.

Part 15 certification mostly deals with radios capable of "scanning" or wide frequency operation. Part 95 is focused on certification for little to no interference to other devices. Part 97 pertains to amateur radio governance.

These are just high level summaries of a few FCC rules that often come up in amateur radio discussion.

At some later date, the Alinco MD-5 will likely be properly certified, so maybe there is nothing to worry about, or is there?

Certain vendors such as Retevis, TYT, Radioddity, Baofeng and others seem to already by looking for loop holes to still sell radios in the US and for users to remain in compliance of US law. These loopholes include setting up US address headquarters as noted in relation to the BTECH 6X2 and also that the Radioddity GD-77 was just a re-branded TYT model

Alinco clearly is trying to do the right thing through certification, but will it succeed as it relates to Part 15, 95 and 97? Chances are it will and this could be a reason why Kenwood, Icom and Yaesu have not yet tried to sell a DMR capable radio because they will likely also want to do it 100% the right way also.

Up through the mid to late 1990's any radio sold in the United States and marketed towards the amateur radio community could not have any "out of the box" capability to transmit outside the FCC Part 97 spectrum which overs amateur radio.

Some radios also had/have restrictions covered under Part 15, 47, 80, 90, 95 to reduce the ability to receive certain frequencies as well as to transmit on frequencies licensed to other services such as marine VHF, MURS (154MHz), FRS, GMRS, and CB frequencies in the US.

Many vendors had simple modifications that could allow "out of band" transmit capability and were often called the MARS/CAP modification.  Clipping a certain color wire or soldering two or more pads together are all it took to enable this functionality.


With Military Affiliate Radio Service (MARS) or Civil Air Patrol (CAP) no longer permitting radios not capable of narrow band (N-FM) or tight frequency tolerance (<0.5 PPM) operation for digital modes, most "modified" radios while possible to operate out of the amateur bands could no longer be officially used under MARS/CAP because of how those two service changed how the treat the use of radio equipment.

Have a look at websites such as Mods.dk and other clones of it that share helpful tips on how to modify radios for different manufacturer unintended features.

Has any vendor been in trouble?

Back when Radio Shack was in operation, they got in major trouble for releasing a radio named the HTX-204 that was so easy to modify, it got pulled from stores in less than a week and most of the stock was physically destroyed.

Since that time in 1997, there has not been such an infraction, so how have certain vendors avoided the same issue since?

Baofeng was one of the first Chinese radio companies to sell inexpensive analog radios in the US and were capable of "out of band" operation with no modification and there was also no easy way to restrict operation to only the amateur radio bands.

With many of the DMR radios, they come fully capable to operate out of the amateur band, but can be restricted in the software to only amateur radio spectrum.

The very popular TYT MD-380 is one such radio that can be restricted this way through modification of one file that can then be uploaded to the radio. This was partially covered in the past "Radioddity GD-77: Frequency Expansion".

In mid 2018, it has been rumored that a slightly different version of this TYT radio has started to turn up with some sort of "changes" but has not been verified by HVDN. Could this be part of a start to better control radios being sold to the amateur radio community?

The Alinco MD-5TGP right now is being sold by amateur radio vendors and clearly we know who is buying these radios.


However, this Alinco radio is not being marketed by the sellers to the amateur radio community. One vendor explicitly states:

Other vendors do not have this clause, so what we will likely learn when HVDN does its official review includes:


HVDN will publish the first part of the Alinco MD-5TGP the first week of November and a second part shortly there after.

Register for updates to not miss

this and other HVDN Notebook articles