October 2018 Global Digital Repeater Round Up

It is truly amazing to see such tremendous growth in digital voice modes the last two years.

What started for Steve K2GOG in 2016 as a theory can now further be validated by fact. DMR was the right technology to invest in as it relates to amateur radio digital voice technology.

In October 2016, he presented an overview of competing digital voice standards at one of the local Hudson Valley of New York amateur radio clubs located in Ulster County.

Since that point in time, he has taken 4 probes of the total number of repeater counts globally as well as for those just across New York State.

The current global state of just what will be now further defined as "wide area digital repeaters" has seen DMR grow an amazing 78.03% in a two year span.


Wide area repeaters are one of the best ways to measure growth of digital voice mode adoption because the equipment needed is expensive.  Repeaters usually are only worth the investment if users have appropriate equipment that can access them.

So, a little of "what comes first, the chicken or the egg" scenario usually happens when it comes to repeater deployments.

Since repeaters can be expensive and are designed to reach a wide audience of users typically located in a 30 to 60 mile radius, the operators of repeaters typically list these infrastructure resources on the repeaterbook.com website to make it easy for amateur radio users to find out what repeaters may be worth programming into hand held or mobile radios.

The repeaterbook.com website is not 100% perfect as a data source, but comes pretty close to chart growth patterns of amateur radio repeater deployments


The below chart shows the other major digital voice mode repeaters globally at various points in time over the last 2 years. 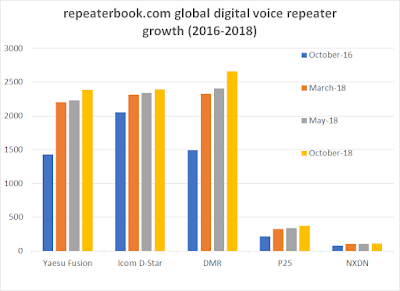 DMR:  Reasons Why It Grew The Most

Before we get to DMR, lets explore the second highest globally adopted digital voice mode known as Yaesu Fusion.

After a few years of being on the market alongside the Icom D-Star system, both vendors offered comparably priced digital voice equipment and few options to choose from.

The average cost of a digital voice capable hand held radio was just above $300 back in 2016.  This inhibited adoption of Fusion and has certainly had a negative impact on Icom D-Star.


In 2018, Yaesu released the FT-70 dual band FM and Fusion radio which is currently priced at well under $200. This is one reason that made it easier to adopt Fusion thanks to more aligned features and pricing to help it catch up to DMR which has mostly had lower priced equipment from the start.

Prior to Yaesu releasing this moderately priced FT-70 hand held radio, they also released some nicely priced mobile radios as well to help build out the overall ecosystem of Fusion capable radios available for purchase.  Icom in comparison has not done this.

This should partially explain the flat growth of Icom D-Star compared to Yaesu Fusion.

Getting Back To DMR

DMR is an open ETSI standard which made it easier for vendors to offer a product at a good price without having to pay to license technology such as D-Star which is majority owned by the Japanese Amateur Radio League.

In October 2016, Fusion and DMR had just about the same number of repeaters globally and almost grew at the same pace until mid to late 2017. In 2018, things are clearly different with DMR.

As of October 2018, there are now 5 different manufacturers of dual band hand held radios and a few more models spread among them. Examples include:

What about NXDN and P25?

NXDN and P25 are aimed at commercial users, but the amateur radio community has started to use surplus or retired equipment within the VHF and UHF amateur spectrum.

Adoption is low, but its still too early to tell if either of these options in the next 3-5 years will replace DMR as it relates to amateur radio.

Hopefully this is not going too far out on a limb, but here are the predictions for the coming year.

Alinco was the first main stream vendor to offer a DMR radio with its MD-40, but saw little adoption due to price compared to similar radios like the MD-380. 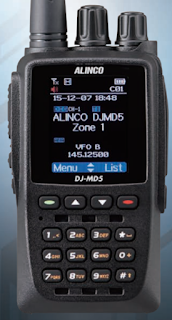 Alinco's new MD-5 looks like it will be a winner based on features and price and may get the later adopters interested in DMR in case they do not trust some of these newer vendors listed above.

It has been rumored that Alinco, Connect Systems and possibly one other vendor will offer new dual band mobile radios in 2019 as well which will likely go over well globally.

Excluding hotspot devices, network radios and cross connect systems which will all be covered in future articles, it seems that DMR is as close to an FM analog replacement technology within amateur radio.


Perhaps Icom, Yaesu or Kenwood will release a DMR radio in 2019 based on market demand and lost opportunity.

What do you think are some likely predictions for digital voice repeaters or radios in 2019?