SSTV with the UNDR Net?

Since the name of this net is a bit of a mouthful, perhaps the abbreviation of UNDR NET may catch on, or may not.  What do you think? (Share comments below if you dare!)

The month of September in the United States is National Preparedness Month as sponsored by the Federal Emergency Management Agency (FEMA) and more details can be found at READY.GOV

Every week has a different theme, with the first week being focused on how to make a plan.

With the hurricane season in full effect, most places between Louisiana all the way up the Hudson Valley of New York have had massive impacts from this latest storm and good advance planning is useful should you expect to ever be impacted by natural or other disasters.

Amateur radio and its different ways of providing redundant auxiliary communications are good to be aware of as a way to add comfort to certain situations.

Some helpful tips from our participants

This week's on air discussion enabled by the wide area Overlook Mountain Amateur Radio Club and its repeater high above Woodstock, NY on 146.805 MHz had two features this session.

The first feature was some high level thoughts about planning. Here are some top snippets from the 8:00 PM discussion on what to prioritize.

A picture is worth a thousand words - Feature Numbah Two!

There were 10 total participants during the September 7th UNDR Net and while the focus of the net is to serve the Ulster and Northern Dutchess  Counties of  New York,  because the reach of the 146.805 MHz repeater is so great, this week we had the following local and further away participants:

While this repeater is normally only used for analog voice communications, it is also possible to send other narrow band non-data signals in an emergency or at a time which will not interfere with other communications.
This week we experimented with sending small 640x480 resolution photos using slow scan amateur television mode known as PD90.
To send an image in a narrow channel such as the 20 kHz bandwidth that the OMARC repeater uses, roughly about 90 seconds is needed.
Steve K2GOG as net control transmitted three different images he created before the net and sent them using a program called MMSSTV using an Icom IC-705 radio.   Most any radio can be used to send or receive images though.
In an emergency setting when a base radio and computer are not available, its possible to use an inexpensive handheld radio and your smartphone using an application like Robot36.
Here are the audio files that were sent which translate to pictures, after you  scroll down to click on the links:

The signal level was set to high on Steve's radio so that those receiving the signal would need to adjust reception audio correctly to receive the signals and convert them in real time to pictures.  Future tests will have reduced signal levels to aid in reception by some participants.
Here are some results from a few who participated on the net plus one person who was listening only and sent a reception report to me via email. Thank you Larry (A) , Jim (B) and Ken (C) ! 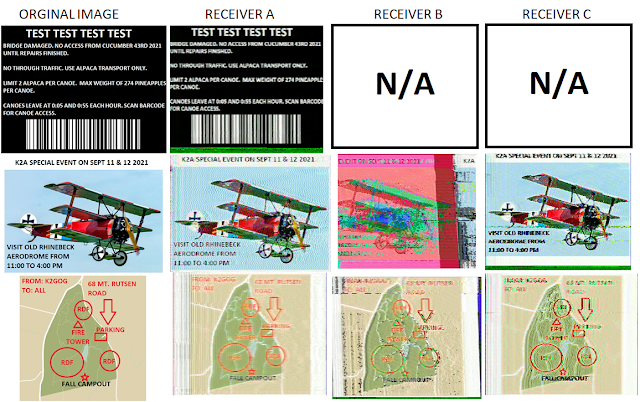 Something(s) to think about (Scroll down!)
Based on the discussion and experiment, here are some interesting participant feedbacks to give a listen to which may inspire curiosity.

Hope you enjoyed this article and can join us next week at 8:00 PM on  September 14th for the theme of  "Build a Kit" as part of a preparedness plan.
Following loose discussion on that topic, we will attempt another SSTV experiment before closing the net.
Also a quick mention that this weekend is the special K2A event at Olde Rhinebeck Aerodrome with details available on the locations website. Feel free to stop by between 11:00 AM and 4:00 PM to chat about amateur radio, SSTV,  remote control aircraft or to just have a good time.
And a final thought,  Winter Field Day is 143 days away and will be again taking place at Ferncliff Forrest in Rhinebeck, so start making plans for that also!!
Until next time....
Steve K2GOG
Posted By HVDN Team