Yesterday was the first annual Hudson River Radio Relay event. This year our fundraising theme was to support Bannerman's Castle Trust via GoFundMe and we managed to raise $1,418 in total with over $300 of that coming in the hours leading up to, during and just after the four hour event which took place from 1:00 PM to 5:00 PM Eastern US time on June 12th 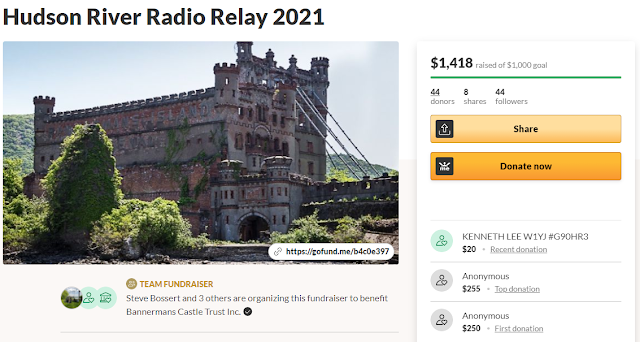 While we await the final logs from all eight of our participating special event stations to get compiled and posted to the HudsonRiverRadioRelay.com website, an initial estimate from casual discussion with most all the participating locations sounds like we should end up around 500 to 600 total contacts as a collective group.

There are so many positive things that will get mentioned about this event that will get published in the coming days along with lots of pictures and videos, but here is a quick snap shot just based on who visited each special event web page as well as the QRZ.com page for each of our eight callsigns. 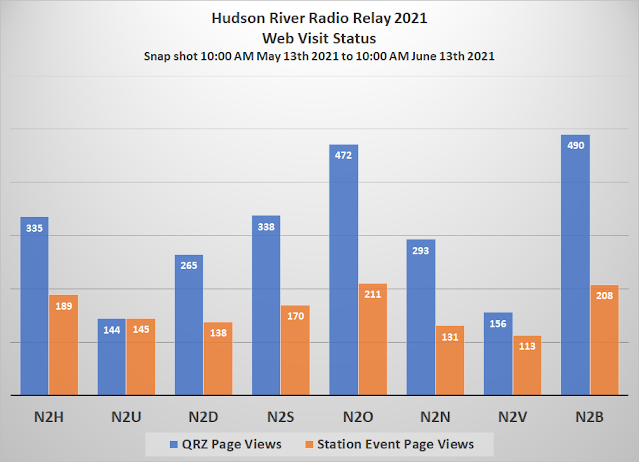 It was expected the N2B station would possibly gain the most attention as a never before activated USIAP island NY047, but the N2O station rivaled our flagship location mainly due to its various USIAP, COTA, POTA and SOTA designations along with an amazing number of enthusiastic members that promoted what they were doing.

Our three stations that were not aided by affiliation of the different "on the air" categories like islands, parks or summits such as N2H, N2S and N2V seem to have also been very popular too over the last 30 days of measurements and deserve a lot of credit also.

The three lowest elevation stations, some only a few feet above the river such as N2U, N2D and N2N are hidden gems that deserve much more attention considering how hard they worked and are all actually very rare locations that we need to help promote even more for next year.

Now that we have an official website visit metric posted just after the event, please go and learn more about each club and location they operated at during this special event by visiting HudsonRiverRadioRelay.com

More detailed articles from each station highlighting each sponsoring club and a list of total event contacts plus the winner of our Xiegu G90 package raffle will be coming soon, so please follow the HVDN blog for more details between now and ARRL Field Day which is just under two weeks away.