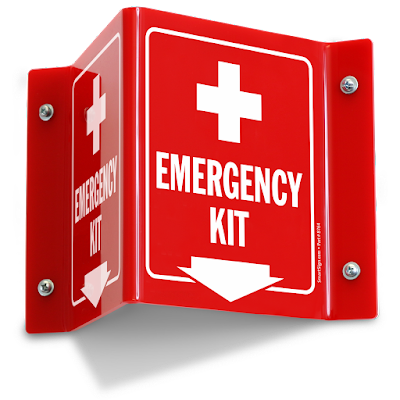 There are so many different antenna connectors within amateur radio today and sometimes, trying adapt between them is frustrating for certain applications.  This article hopefully helps offer some important tips when buying different radios, accessories and antennae.

What is an SMA connector?

The SMA or sub miniature version A is a popular connector, but comes in a few confusing variants.

The SMA male version has a protruding center pin and outer shield with the threads facing inwards. The SMA male is usually only found on the end of coaxial cables and also on the bottom of handheld antennae.

There is a reverse polarity version of the SMA connector and is known as the RP-SMA or SMA-J connector.  The male version of the connector has the threads facing inwards along with a hollow center receptacle. The female version has threads that face outwards and has a center pin that protrudes.

This newer reverse SMA style connector was originally made popular on Wi-Fi routers to help prevent connection of external antennae.  It then eventually became very popular after seeing use by Baofeng and many other China origin hand held radios.

Today, of the current amateur radio handheld units available, many vendors have started using the reverse SMA connector and sometimes this creates issues when trying to connect certain types of external devices such as amplifiers, antennae and accessories.

There are actually a few adapters I would suggest buying and the first one you need if your radio has a SMA-RP style connector is this one and if you are inclined to buy via Amazon, a portion of your purchase using Amazon Smile goes to the Overlook Mountain Amateur Radio Club. 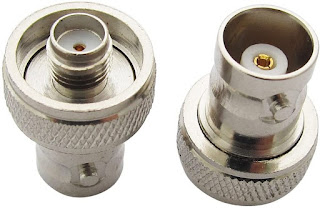 The benefit of this connector is that it will fit flush mechanically on most all SMA-J equipped radios such as the Baofeng, Wouxon models plus the Alinco DJ-MD5, Radioddity GD-77 and Yaesu FT-65R.
Using this connector will allow connection to antennae or cables with a BNC male much more easily.
If you have a standard SMA equipped radio like the Kenwood TH-D74, Yaesu FT-3DR, Yaesu FT-70DR or Icom ID-51, the adapter you need is this one via Amazon Smile.

If you purchase both types of adapters, you can screw them together to form a female to female BNC coupler which is very good to have if you ever need to connect two BNC cables together that have male connectors on them.
It is a great idea for your connector emergency kit to get two sets of each connector and store them screwed together so its harder to misplace them when not in use.
You can also use these two connectors slightly unscrewed as a passive attenuator when doing different radio direction finding activities.
SMA to BNC Cables
You never want any more than three connectors or adapters in use since it increases unwanted signals from leaking into an antenna system and also multiplies your points of antenna system failure.
If there was one cable to purchase, I would choose the standard male SMA to SMA cables and use a standard SMA female to BNC male adapter on both ends like these. Alternatively, you can skip the SMA to BNC adapters and just obtain a cable with male BNC's on either end, like these 6 foot ones.
Real World Example #1:   Arrow II Beam Antenna
This antenna is popular with those interested in VHF/UHF LEO satellite communications as well as with those looking for a dependable high gain directional beam for temporary emergency or summits on the air (SOTA) type of applications.
The Arrow II antenna uses BNC female connectors which male BNC cables plug into.  Purchasing these items listed above gives you the ultimate connector kit to attach this fine antenna to nearly any radio that uses an SMA or BNC connector plus provide additional feedline length without losing too much RF in your feedlines.
If you use the in boom duplexer which combines both the 2m and 70cm antenna sections into one BNC male connector to attach to your radio, having the BNC to SMA adapters listed above makes for easy and reliable connection.

Real World Example #2:  Offset attenuator
This popular device made by KC9ON is great for use with a fox hunt and is easy to connect to an Arrow II antenna or a home made Yagi with a BNC connector.
But, connecting from the offset attenuator to the radio can be a challenge.  Purchasing the BNC cables and SMA to BNC adapters helps easily solve that issue. 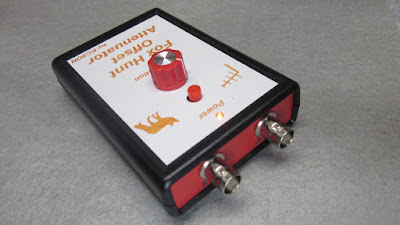 Many amateurs have one of the different 2m/70cm magnetic mount antenna such as the Nagoya UT-72, Diamond MD77SMA or Tram 1185.   They mostly all come with different standard SMA, SMA-RP or BNC connector options, but what if you do not have the right connector or adapter to attach to your radio?

Purchasing the suggested connectors above will simplify your emergency antenna kit and also provide almost near universal use if you need to loan it to someone along with the fewest number of connectors.

If you are looking for a emergency magnetic mount antenna,  buy one with the BNC connector on it instead of the SMA.  Why?  You can use one BNC to SMA adapter to connect to a radio.   Also, if you needed to connect the antenna to a "real" mobile radio, you most likely will only need a BNC female to PL-259 adapter.

If you are serious about VHF/UHF operations, please consider reducing your dependence on this style connector, especially if you have interest in portable or emergency operations that involve a hand held radio.

These style connectors are far too bulky for use with a hand held radio if you will be moving around with it and may create more stress on your hand held radio connector or increase signal loss.

This very common connector should also be used in a fixed or mobile application if you have not already considered switching to N style connectors where are much better for VHF/UHF applications.

What about those thin RG-174 cables with connectors on them?

There are a number of adapters that are helpful like this standard SMA male to SO-239 adapter, but it is my opinion that this creates more problems over time, especially if they are used in portable applications and is best to avoid these as the failure points are increased greatly.

Does this article solve every connector issue?

No, this is not the 100% definitive guide to every connector for every application, but if you find yourself trying to simplify your portable antenna and radio use to as few connectors as possible, please consider the BNC connector as your safe and dependable option for portable applications.

Before the SMA style connectors began appearing in the late 1990's, the BNC was very common and it deserves another look as part of your connector emergency kit along with the different types of SMA connectors available today.