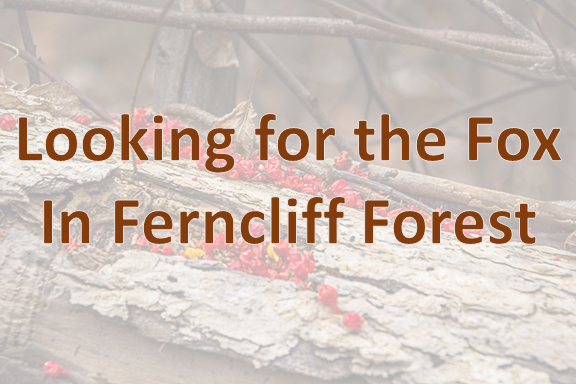 As the article title suggests, the recent radio direction finding (RDF) event in the Hudson Valley (HV) thanks to both the Overlook Mountain Amateur Radio Club (OMARC) and Hudson Valley Digital Network (HVDN) was a fun time to be socially distanced and educational simultaneously.

Here is a summary of the first "Fox Hunt" to take place in northern Dutchess County since COVID-19 disrupted normalcy while using directional antennae to find a hidden transmitter. 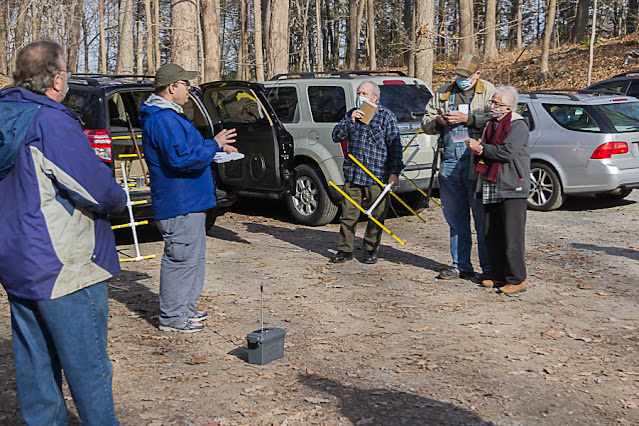 Did we find Alf at Ferncliff Forrest?

The goal of this joint radio direction finding event between two great organizations and its membership was to hide a remotely controlled transmitter box known as a "Fox" and participants were going to try to find it/catch it somewhere in the well maintained Ferncliff Forest Game Preserve located in Rhinebeck, NY. 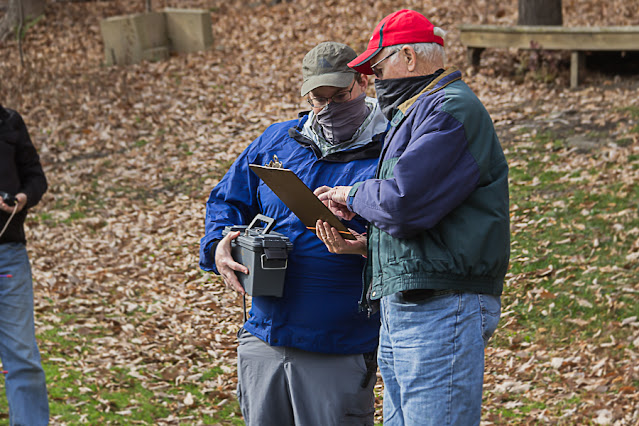 Ahead of the hunt which took place on November 21st, many hunters constructed a directional antenna known as a Yagi which was optimized for finding the location of transmitters thanks to Joe WB2HOL, formerly of the Hudson Valley and charter member of the Putnam Emergency & Amateur Radio League (PEARL) club before relocating to warmer weather in North Carolina.

Made from inexpensive materials such as PVC pipe and discarded tape measures, each hunter was able to find the peak and null of the hidden transmitter to help find which direction to travel and be the first to find the transmitter hidden which was inside a common case found at Harbor Freight Tools. 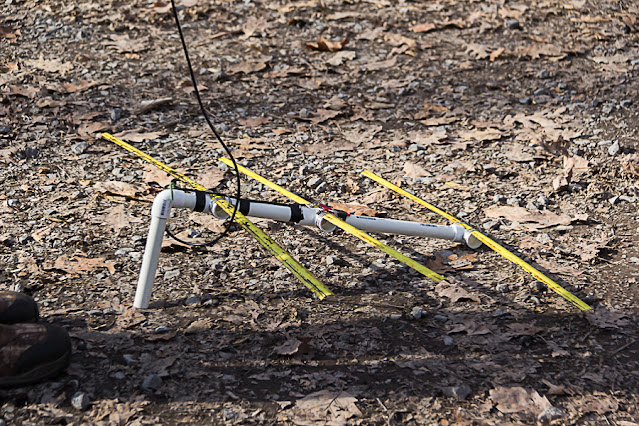 While conducting some pre-event education in the parking lot and during the hunt, a number of families who were out enjoying the day commented about our antennae and some children thought we were looking for aliens when they heard the signal coming from each hunters radio. 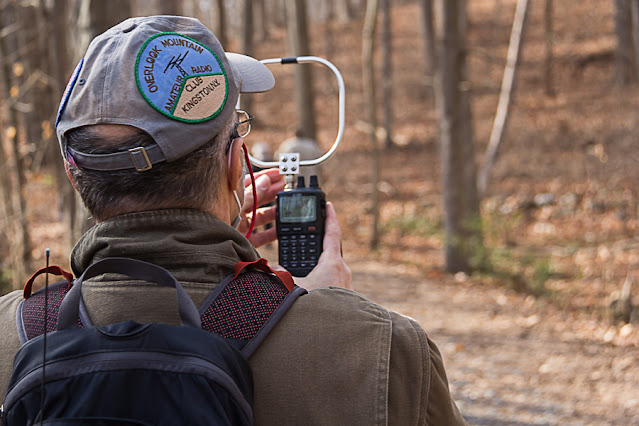 Steve K2GOG was the organizer of the event and was tasked with hiding the fox after a basic  demonstration of antenna and radio direction finding theory for those who would go and try and find the transmitter.

Beyond the easy to build Yagi antenna designed for the amateur radio 2m wavelength band at a frequency of 146.565 MHz, Steve showed off other options he has used such as a handheld TDOA from Rainbow Kits (Time Delay of Arrival) and UHF half Egg Beater, of Steve K2GOG own design and inspiration for the HVDN HASviolet antenna V1 on 900 MHz.

Lloyd K2JVX brought his Arrow DF loop antenna which amazed other attendees at how small it was. Rob W2RWS was eager to try his Arrow II antenna and its 70cm capability for tuning to the harmonic of the transmitter found on 439.965 MHz. All these mentioned types of antennae are easy to build or purchase and each offers unique benefits and challenges when used for RDF. 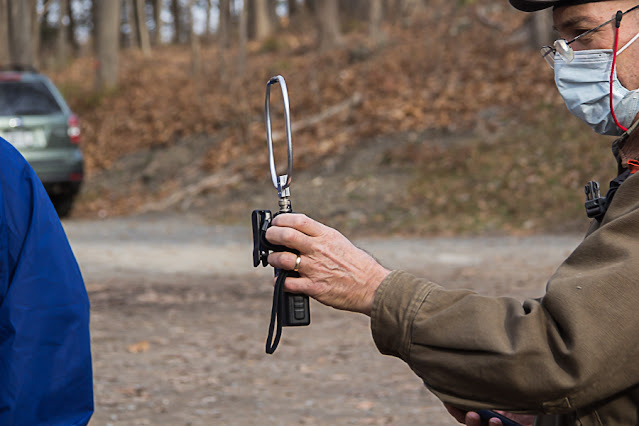 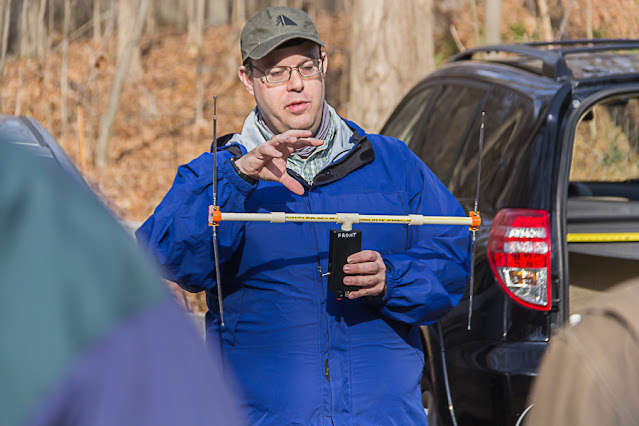 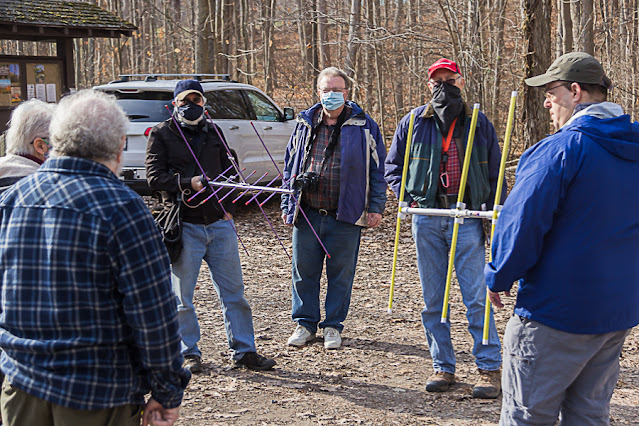 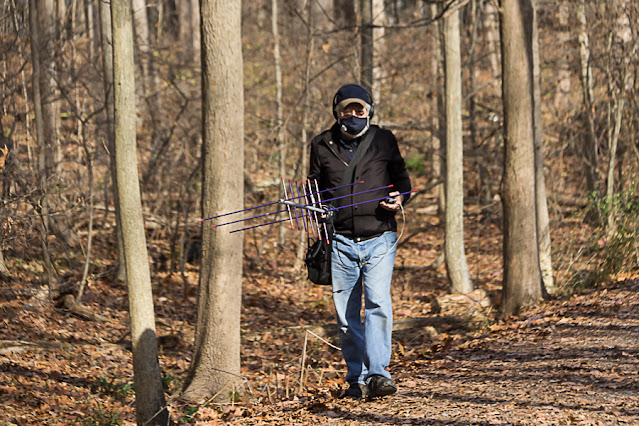 The hidden transmitter was based around the combination of a Byonics Piccon V2 and a Lanch HG-UV98 radio. This arrangement provided the primary ability to remotely control the transmitter by sending a DTMF tone to sequence the transmitter which sent out a combined set of random tones followed by a cryptic Morse code message on 146.565 MHz that the hunters used to find the fox.

The secondary ability was to also transmit an APRS beacon on 446.500 MHz which allowed GPS, temperature and voltage to be sent back to Steve K2GOG should the fox become abducted by someone or malfunction in some way.

Lloyd K2JVX was the first to find the transmitter hidden towards the rear of the pond.  Rob W2RWS was close behind and both hunters almost found the fox before it stopped responding to command codes, which meant a rescue operation was needed.

Bob KD2QAK used a different method to find the fox by taking signal readings at known locations and plotted the direction of the signal on a map. He drew lines to see where they intersected and clearly defined the general area where he thought the signal was coming from.

This first hunt was very successful as it taught everyone that multiple techniques and equipment could be used to find the general location of a fox, but the strong 1 watt signal actually made it hard to find the fox as each hunter got pretty close to it, even within the last 15 feet. Other equipment designed for closer detection was needed. 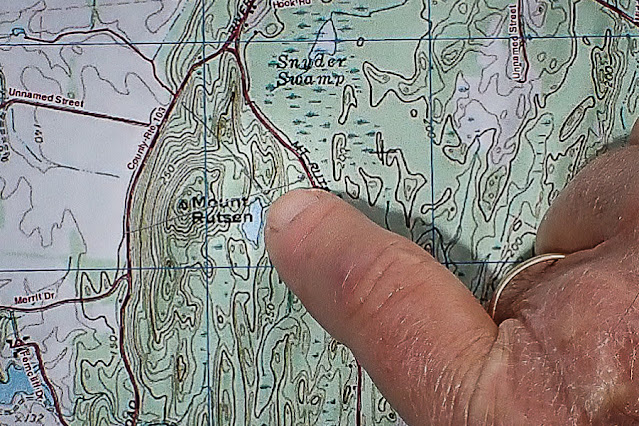 While a 1 watt signal radiated from a simple Radioshack telescoping antenna sounds like it would be easy to find, its strength made it hard for all hunters, so a demonstration using a dummy load as the antenna was done to show how to better tune to the null of the fox or how to attenuate the received signal through the use of methods like the "body fade" method using a standard rubber duck or better design or selection of antenna or receivers.

Certain radios like the Kenwood TH-D74 and Icom IC-R20 seemed to work the best due to advanced attenuation and  RF gain features. Much more inexpensive radios like the Yaesu FT-70DR, Yaesu FT-4XR did not due as well since the receivers in them were easily overloaded by strong local signals.

Guy KD2TLF found success by tuning away 10 or more kHz away from the actual signal to attenuate the signal in his Yaesu FT-4XR while both Bob and Zina focused on using the harmonic and null to get closer to the fox with the FT-70DR.

We also learned as a group that the dummy load Steve used radiated its signal horizontally compared to the RadioShack antenna which was vertically polarized. This knowledge may come in handy for the future to confuse future hunters. 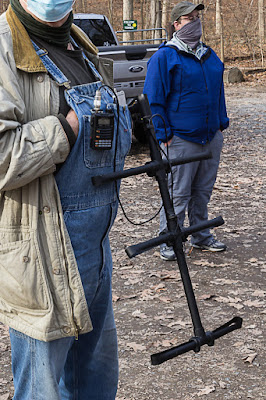 As Lloyd found the first fox, he was elected to hide the transmitter for the next round. After an unexpected malfunction with an external blinking safety light on the fox, the hunt was declared open season and the hunters took off to see where Lloyd hid the fox.

Steve K2GOG decided it may be an unfair advantage to use some of his more advanced tools like the TDOA array or even his specialty field strength meter, so he started the hunt using nothing more than the standard rubber duck with his Kenwood TH-D74 and relied upon the body fade method of signal detection.

He got his bearing by holding the radio close to his front and rotated around until the signal decreased towards his rear.  Walking another 15-20 away, he took another bearing and did this every so often to see if he was headed in the right direction.

Not too much later, he came across Ken KD2TQS (Official event photographer) who had followed Lloyd into the woods to hide the fox.  Steve knew he was getting close and pressed onward.

Soon after Steve got to a location that the transmitter must be close to, he found Lloyd sitting on a nearby log having a snack.   Just after a few minutes later while trying to get closer to the fox, Rob W2RWS and Guy KD2TLF showed up from a different direction trying hard to find the fox. 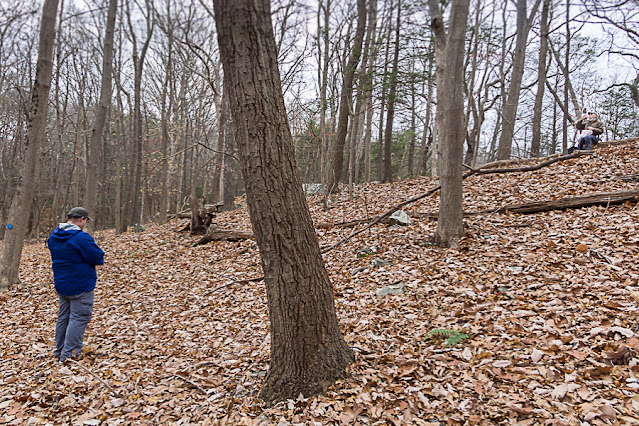 Because Lloyd was tricky in where he hid the fox next to a thick tree that was tilting over at about a 30 degree angle and some rocks that are known to contain iron ore, it took the 3 hunters more than 20 minutes to find the fox which was covered with leaves and its antenna just barely poking out.

Steve followed by Rob and Guy finally found the fox and we decided to call it a day after roughly 3 hours and 10,000 steps in Ferncliff Forest. 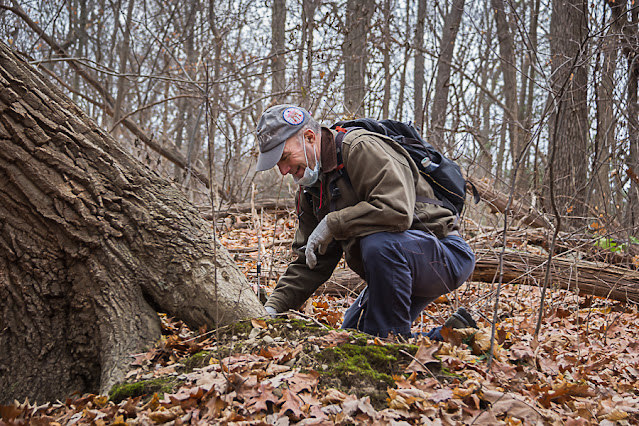 After the group met back up with Bill KD2UEN and Zina KD2UEO back at the parking lot, some prizes were awarded to commemorate the event.  An offset attenuator kit courtesy of KC9ON was awarded to Rob, a dual band rubber duck was given to Lloyd and a set of orange and black zipties were given to all other participants.

Much was learned during this on foot fox hunt and the day was enjoyed by all who came out to brave the nice weather and clean air away from home.

We are going to be planning future events like this and weather permitting, the next fox hunt will likely take place during the Winter Field Day event that OMARC has done the past few years.

Please visit the 146.805 MHz repeater broadcasting from high atop Overlook Mountain in Hurley NY to talk to those mentioned in this article and to learn about Winter Field Day 2021 or other OMARC activities. 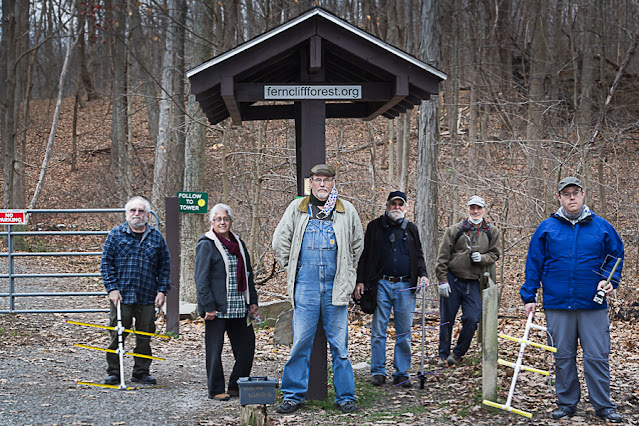