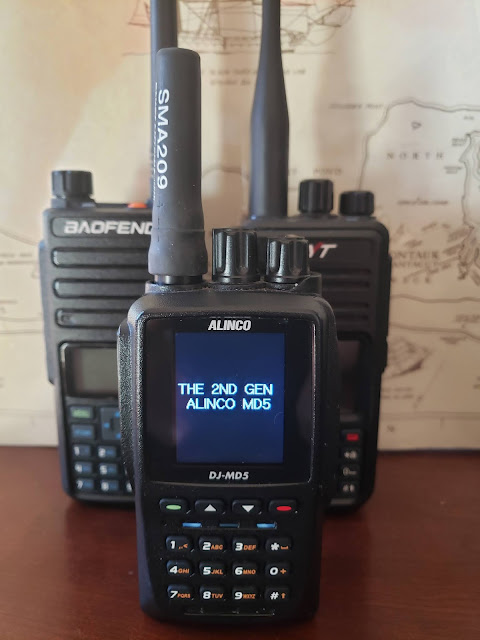 Alinco was the first main stream amateur radio vendor to offer a DMR radio way back in 2016 with its  DJ-MD40 UHF only radio.  Less than two years later, they came to market with the dual band DJ-MD5TGP which included a GPS and was roughly based on the same reference design as the popular Anytone D878UV. Main stream being defined as Alinco often being included alongside Icom, Kenwood and Yaesu.

With many other radios such as the TYT MD-UV380, Radioddity GD-77, Baofeng DM-1801 and Ailunce HD1 offering dual band spectrum coverage at various price and feature differences, it looks like Alinco is about to offer its second generation version of its 2018 released "MD5" radio for short and it will offer a few things not found elsewhere, including a third band for some markets!

This now further cements that Alinco is only going to focus on DMR for the amateur market, Kenwood and Icom on D-Star and Yaesu on Fusion for the time being until hopefully the HVDN backed M17 project and its TR-9 open source radio finds a manufacturing partner in China or maybe with one of the main stream vendors to stop fragmentation with so many competing digital modes.

How many MD5 are there?

The DJ-MD5TGP has been the more expensive version and included a GPS.  The slightly lower cost DJ-MD5T is identical, but does not have the GPS and typically sells for $20 less.  Both versions are covered under the FCC ID of PH3DJ-MD5. The earlier DJ-MD40 can be found under FCC ID PH3DJ-MD5.

The new, but not yet FCC certified Alinco DJ-MD5XT is going to likely require its own FCC ID as early documentation shows that this will be the first true tri-band DMR radio which will cover the 2m, 70cm and 1.25m amateur radio bands, plus extended receive above and below the VHF and UHF bands as usual.

Looking in the just released computer programming software available on the Remtronix website, it clearly shows an option under MHF for 220 to 225 MHz. 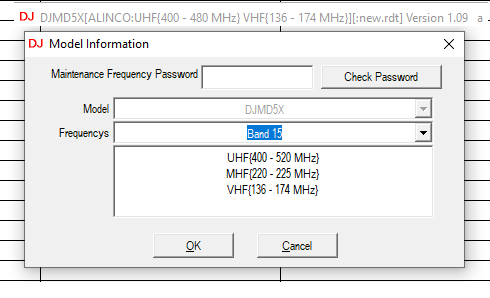 When it was discovered that certain band combinations would allow reception and transmission above 480 MHz just like in the Anytone D878UV and BTECH 6X2, Alinco was quick to issue new firmware to prevent this, but was easily bypassed with a 3rd party software tool to enable 480 to 520 MHz coverage.

These extra frequencies are sought after in countries like Australia where there are UHF CB channels and in the United States where first responders such as New York City Police and Fire user channels above 480 MHz.

Without spending time attempting to get an Alinco MD-5TGP with or without the patched 1.13c or 1.10 firmware to work with the CPS 1.09a meant for the new Alinco DJ-MD5XT, it would likely appear that the new Alinco DJ-MDXT due to having a band option meant for 1.25m should suggest there is different hardware inside that will offer safe operation of the 220 MHz band.

While many radios mentioned in this article can be "hacked" to give the impression they will work on the 1.25 band, it is not suggested to transmit as it will ruin the RF power amplifier and filtering in the radio since it is not designed for that spectrum.  Hopefully the Alinco DJ-MD5XT will support this great and underutilized band available only in the United States and few other countries globally.