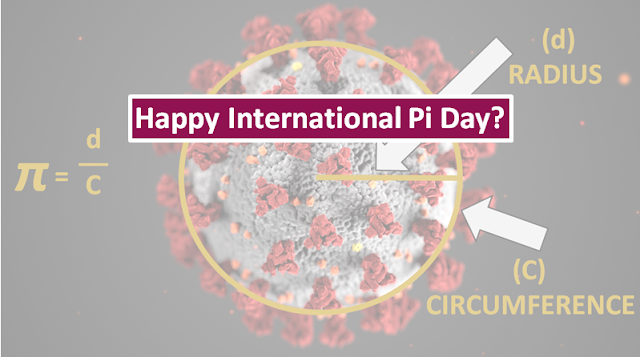 To help celebrate International Pi Day,  the HVDN team would like to share a tiny preview related to our HASviolet project we were expecting to release at the WOPR Summit later this month.

Unfortunately, the blasted COVID-19 virus forced the event to be rescheduled for September 18th to 20th, but we are keeping our project goals on track for release since we have even bigger plans for HASviolet for the rest of the year!

Our project goal was to create an educational platform involving (H)ardware selection, (A)ntenna theory and (S)oftware involving LoRa communications as well as other FSK, GFSK, MSK, GMSK and OOK modulation method applications in the future.

The letters in the word "HAS" may make more sense now, but the color "violet" needs a little more explanation.

We want to promote the use of  900 MHz and above spectrum for both amateur radio and "IoT" hobbyist use so we chose the frequency of 911.250 MHz as our initial project center frequency and namesake.

The HEX value of 911250 is a nice shade of purple and hence, how we came up with the second word in our project name - violet!

Our hopes are that this frequency can become the epicenter for amateur radio experimentation involving LoRa in the United States.

Releasing this article "just after"  March 14th (AKA "Pi Day") should make our readers guess that our HASviolet project involves the popular Raspberry Pi embedded computer and indeed it does!

You need to have reliable and stable power  for all Raspberry Pi projects and that is what this article will talk about, but just in the context of the Raspberry Pi Zero Wireless device since that is what we are using as part of  the HASviolet project.


Plug in the wall options

The "current" requirements for a Raspberry Pi tend to be at least 2 amps of power and it is advised to use a mains power supply rated at least for 2.5 amps.

Reliable sellers such as Adafruit, SparkFun, MicroCenter, Fry's and even Best Buy or Barnes & Noble in the United States have already ensured what they sell will provide the best user experience. 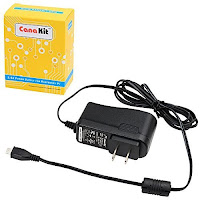 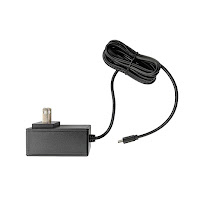 However, it is a good idea to be cautious when making a purchase online via websites like Amazon or E-Bay since sometimes it is harder to know what you are buying from online sellers.  The best price does not always guarantee the best product!

Here is a list of HVDN approved AC mains 2.5+ amp power supplies from select sellers who sell both online as well as through traditional stores you can visit:

A USB power bank is probably one of the best options to power your Raspberry Pi project since you can charge them for portable use by using your plug in the wall adapter or even charge them from any USB port such as one found on any computer.


Higher battery capacity means longer run times. If you plan to travel by air, there is a limit on how large of a power bank you can take with you. Please check airline or local government regulations for details.

In the United States, the FAA sets the appropriate restrictions which the TSA is responsible for enforcing.

In order to match your Raspberry Pi, you will also want one with the USB micro connector rather then the newer USB-C connector so you can use your existing wall mains supply to run your Raspberry Pi directly or to charge your power bank.


HVDN Recommended Option 1: INIU 20000 mAh with  3.0 A output plus USB micro and USB-C input via Amazon.com 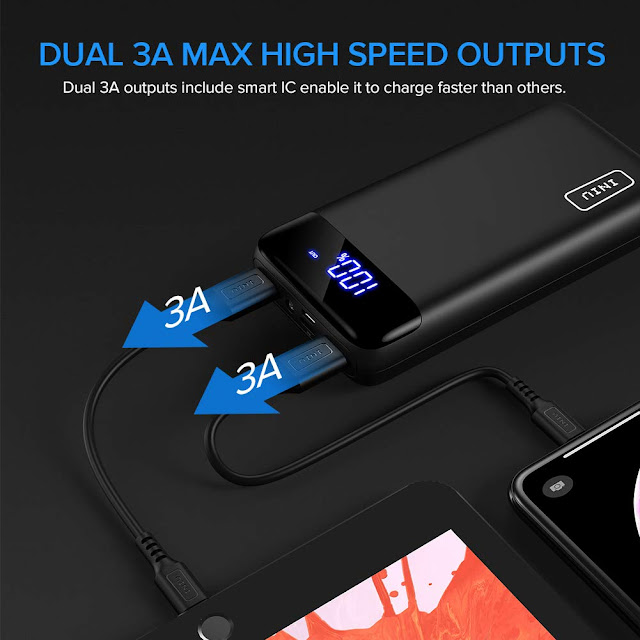 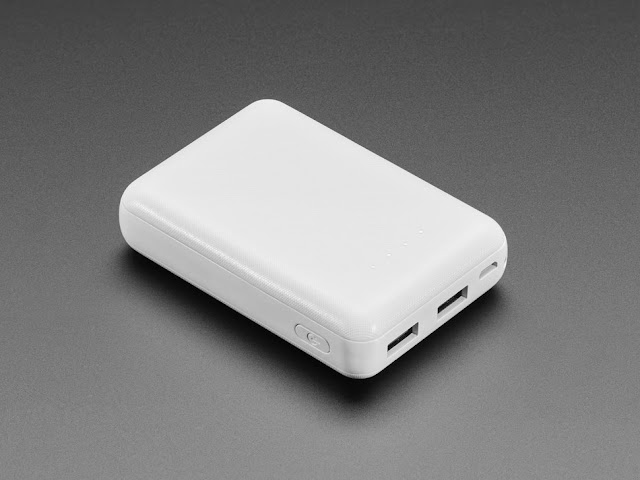 HVDN Recommended Option 3: Baseus PPDMNA USD PowerBank - After extensive research by one member of the HVDN team, this power bank has proven a good value for the money and comes in different colors. This power bank is also very thin. It can also be shipped from different countries for no extra cost.

This power bank offers true USB-C standard for both charging or output.  A micro USB connector for charging is included alongside the standard USB connector to power external devices. 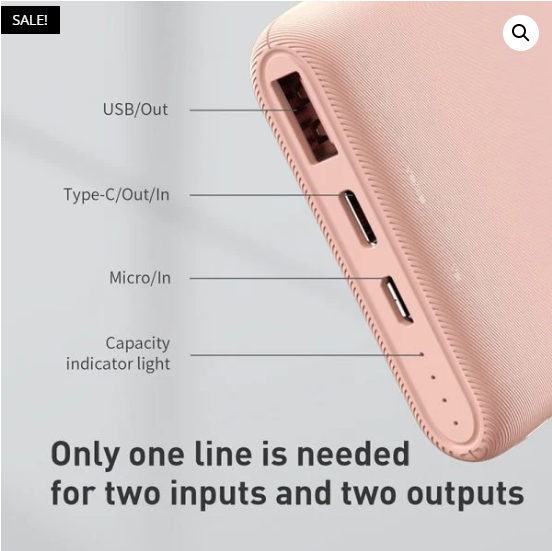 There are far too many power bank options available today and we are only sharing three options.

Our recommendation is option 3 based on price and feature set plus you can even get it in pink or blue aside from the usual black or white colors.

Option 1 is great if you need higher capacity and fancy display plus two USB outputs.

Option 2 is is worthwhile if you are looking to add items to your Adafruit shopping cart, who is one of the main suppliers of components found in the HASviolet project you will be able to learn about later this month (Spoiler: Saturday March 28th at 9:11 AM)


There are many pHat's available for different tasks, but only a few made that can provide a reliable portable power supply.

Here are some options with commentary on ones designed to work with a Raspberry Pi Zero.

pHat Power Option 1:  PiZ-UpTime 2.0 - Not to be confused with the original PiZ-UpTime which only ran on a single 14500 LiPo battery.

The new 2.0 version offers no such restriction and also adds better external on/off control, power in and power out connections along with a fuel gauge to safely power down your RPi when the battery reaches a low amount.

Further details here. The second picture is the first generation PiZ-UpTime for comparison and is not recommended.


Here is the original PiZ-UpTime for comparison and to show the genuine product compared to imitation copies mentioned later in this article. 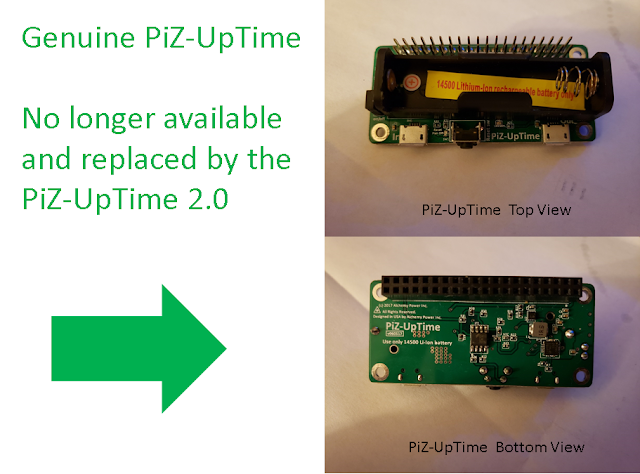 pHat Power Option 2:  PiSugar Portable Power Platform - Some members of the HVDN HASviolet team like this product because it is open source as evidence by its Git Hub project page and its overall set of features.

There are two different side batteries available that are the same size of the board and RPi Zero.  A nice feature is a built in visual battery capacity meter via 4 blue LED and the use of the power pads on the bottom of the Raspberry Pi Zero. The PiSugar can also function as a UPS.

3-D printer files are even available to help create different cases easily or to modify for your own use.

Both the 900 mAh and 1200 mAh versions can be purchased via Amazon.com.  The only only drawback of the PiSugar is the small size of its battery which will limit run time compared to a larger power bank.

One member of the HASviolet team has used the 1200 mAh version of this product and easily got 5 hours of continuous run time while running the "beacon" mode of our project with a transmit interval of once every 5 seconds. 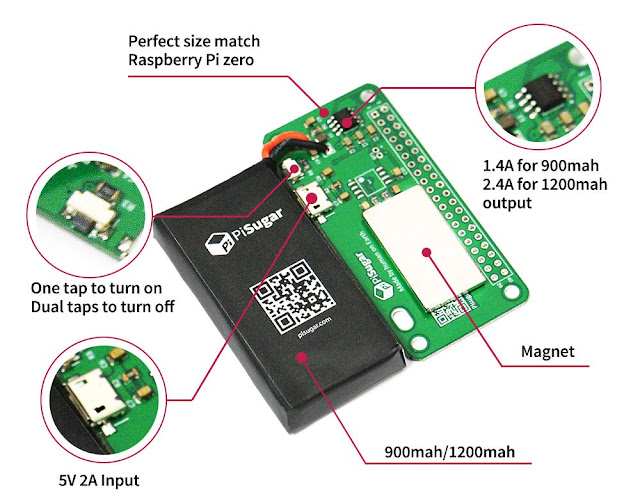 pHat Power Option 3:  Generic UPS Power HAT  - There are many generic UPS power hats available for the Raspberry Pi Zero and we have only tested two.

The first one was a generic version of the PiZ-UpTime original product and was a waste of money.

A few years ago, a counterfeit version caused a fault with a Raspberry Pi Zero and was unable to be used for anything else ever again, including the RPi Zero! Please avoid purchasing this product! 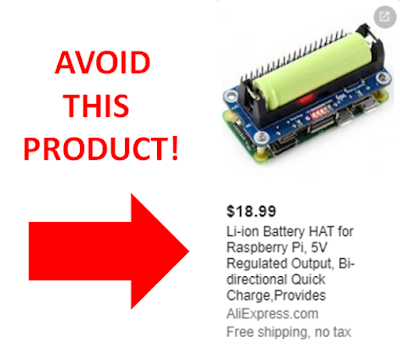 The second generic UPS pHat worked much better but only lasted about an hour which was strange considering the PiSugar worked for much longer with a not much larger battery. This one also uses pins from the underside to power your Raspberry Pi. 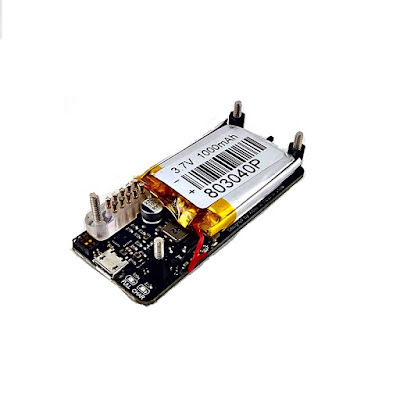 What to expect from HASviolet?

We hope this brief article on power sources for the Raspberry Pi Zero has you curious on what are we building for the HASviolet project.

Our team thinks that people will want to use the HASviolet project both at home and while traveling, hence us starting to make sure power solutions are something you are already thinking about.

Between now and Saturday March 28th, we will release some additional articles focused on the antenna part of the project along with details relating to Git Hub and other basic necessities so that you can start putting aside some hard earned money to buy the needed hardware for HASviolet!

Be safe in the meantime if you are under self-quarantine or in areas overly affected by COVID-19.

Remember those Linksys WRT54 series routers?  Please stop using them and stop buying them on E-Bay! This article will explain why its ... 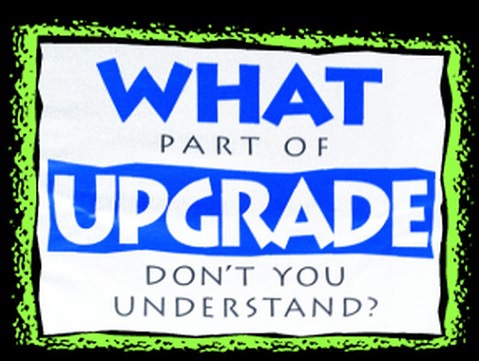