The new "Community Plugin" option by Rodrigo Perez of SDR Chile for SDR# allows near automatic installation of more than 27 optional plug in functions to the popular software defined radio application offered by Airspy.

Upgrading versions of SDR# is now much easier for those like me who customize this software with  helpful tools such as CTCSS decoders, recording tools, signal analysis and so much more....

While all  plugins will not be useful to everyone, this does make SDR# seem fresh and able to compete with SDRangel, my favorite SDR software for off the shelf, ready to go multi purpose wireless signal exploration. Lets compare the two!

Only very recently did Edouard F4EXB reintroduce compiled Microsoft Windows to make the use of his fantastic SDRangel software.

Attempting to compare the two is very hard, so will start with comparing the 27 plugins first against features of applicable SDRangel functions. 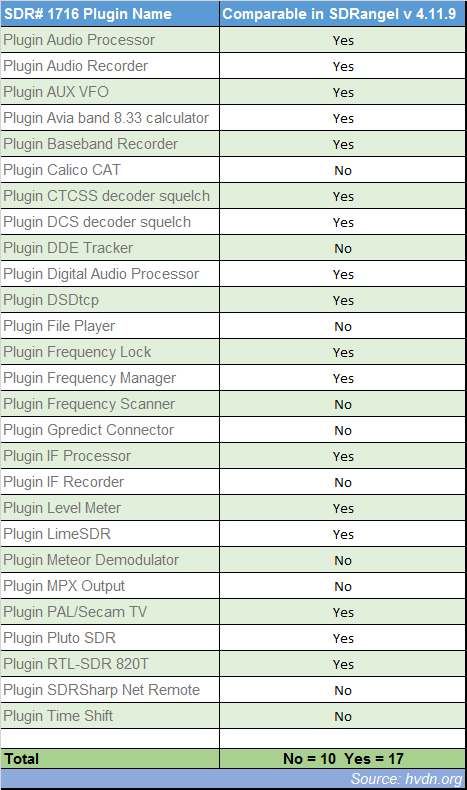 Lets start out with a few of the stand out plugin options that are exclusive to SDR# compared to SDRangel.


What is actually missing from the larger list is more detail about decoding digital voice modes such as DMR, TETRA, D-Star, Fusion/C4FM, NXDN and P25.

While the SDR# Community Plugin does add in DSD+ functionality and Tetra decoding, it is not as straight forward to use compared to SDRangel's implementation of DSD. SDRangel also adds in FreeDV and a LoRa decoder as additional "channels".

SDR# through the television plugin allows the viewing of PAL, SECAM and NTSC analog signals, whereas SDRangel only allows PAL and SECAM but also adds DATV for amateur TV enthusiasts.  These are the older analog television protocols no longer in use, so will not enable the reception of newer digital broadcast television directly with an SDR.

Both pieces of software really can not be easily compared since they do many things better than the other.  The big point to make is that between both pieces of software, you have almost everything one could need that appeals to a modern radio hobbyist not just looking to monitor typical amateur radio or shortwave activities which SDRuno or SDR-Console seem to appeal towards more easily.

Hopefully this article encourages further experimentation with SDR# if you have forgotten about it or have yet to try SDRangel.