Flying in a hot air balloon was a first for Steve K2GOG and proved a great opportunity to test out location positioning using both low power APRS as well as DMR GPS with two different pieces of equipment:

A Kenwood TH-D74 was also taken along for the ride too as a backup in case the PicoAPRS had an issue, but it performed flawlessly.

The hot air balloon Steve was a passenger on was the 2nd to launch early Saturday morning from the Dutchess County Fairgrounds of New York as part of Balloon Fest 2018 sponsored by the Dutchess County Chamber of Commerce and area businesses and organizations. 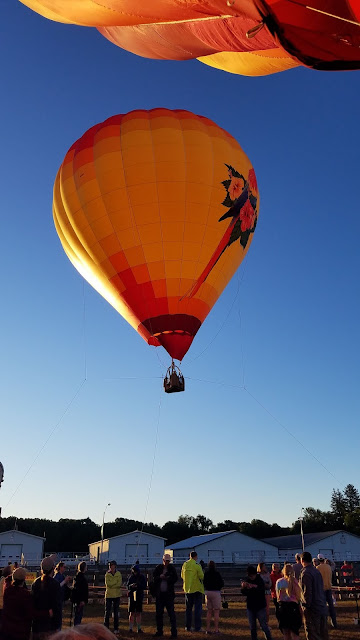 Those looking to taking a balloon ride were asked to arrive at 5:00 AM and launches would happen on a first come first serve basis.  Steve was fortunate to have arrived early and was the third passenger for the second to launch balloon.

There were maybe seven or eight other balloons still getting ready for launch after the "Autumn Above" balloon he was on took to the air, piloted by Scott Griswold of Above All Balloon Rides.

After what seemed like an ahead of schedule launch just past 6:00 AM, the first set of trees was cleared as the balloon made western ascent which would last about 45 minutes before landing in a  near by field. The maximum altitude turned out to be a somewhat disappointing 260 feet.

During the entire ride, Steve shared his position over two modern location enabled applications for amateur  radio in real time to show that "ham radio" is not just old retired engineers in a basement sending Morse code late at night who enjoy this hobby also.

Automated Positioning Reporting System or APRS for short has been around for over 20 years since its invention by Bob Bruninga WB4APR and today uses a common frequency of 144.39 MHz in the United States for users to share short text messages, automated weather reports and location data.

Across the United States are countless amateur radio operators who operate digipeaters that repeat received signals from local users to increase the range of these signals in order to reach a wider audience.  There are also iGateways that take these APRS signals and share them across the internet for anyone to view on websites such as aprs.fi

Steve K2GOG utilized a PicoAPRS device to share his location on 144.39 MHz and his signal was picked up by a number of local area digipeaters and iGateways. This particular radio has a function called smart beaconing which allows more frequent transmissions based on speed and altitude. Steve had also set his radio to include the "-11" prefix which is to recognize it as an  aircraft based use of APRS.

This is also known as an SSID and there are many numerical values to identify different types of users. For the balloon trip, Steve operated as N2HVD-11 which is the official call sign of the Hudson Valley Digital Network Club along with the appropriate SSID suffix of 11.

The PicoAPRS radio was also set up to only send signals to the closest receivers instead of its normal configuration which is for ground based use.

Because the balloon was going to be above ground at an unknown altitude during the flight, it was appropriate to do this because it would provide less congestion on the frequency since the higher a signal is - the further it would travel.

Since the US only has one APRS frequency, it needs to be shared with many users so this setup while less robust or redundant it was more courteous as a best practice of amateur radio.

Using a digital voice radio such as the DMR based TYT MD-UV380 is a bit different compared to the data only APRS enabled PicoAPRS device or a voice and data APRS radio like the Kenwood TH-D74.  There is no common frequency for sharing location data for DMR yet but there is a common talk group which is 310999 in the United States that can be used for this type of application.

A talk group is like a "virtual frequency" in that as long as your radio attempts to share location data on this talk group, it will find its way to where it needs to go regardless of frequency. A talk group can get congested just like a single frequency such as the 144.39 MHz frequency for APRS though, but is not subject to as many collisions with other users so could be more efficient for more users.

The TYT MD-UV380 was set up to share its location with a portable digital hotspot operating on 427.505 MHz. The frequency chosen is one of many being explored for part of a uniform channel plan for users of DMR to bring some standard operating practices to this emerging mode of operation.

Since there were no repeaters in the area that permit the use of sending data only transmissions or nearby hotspots on the ground set up within range of the balloons flight path, the hot spot device was connected to the internet over a smart phone enabled Wi-Fi access point.

Here is a basic block diagram of how the signal from Steve's TYT MD-UV380 made its way to the aprs.fi website to see his location.

Compared to APRS which is more mature with its network of digipeaters and iGateways, sharing location data from a DMR radio may not seem as mature, but in many ways, its much more advanced.

In the above block diagram, starting at right (TYT MD-UV380), the GPS location data is encoded along with transmissions sent over talk group 310999 on 427.505 MHz. This is then received along with time slot, color code and user ID information to identify the transmission or "payload" at the hot spot device.

Note D represents that data is only able to flow one way towards the network, but it is possible to receive location information on the radio but is outside the scope of this article.


Once the UHF 427.505 MHz signal is received on the hotspot device which translates an actual amateur radio transmission to get it ready to make its way to the internet, first the data is transformed from the hotspot to Wi-Fi which is how the hotspot and Samsung smart phone communicate.  Communication of data between the smartphone and hotspot as noted by Note C are two way in nature to ensure security and integrity of the signal.

The smartphone then communicates over spectrum that is licensed by the mobile operator network thanks to local cellular towers per note B.  It is after the data communication leaves the local cellular network does it make its way to the internet as shown by note A.

Sharing location data over a DMR radio is not yet as advanced like APRS since there is no smart beaconing function.  Location "breadcrumbs" are only shared at a preset interval or each time the user transmits manually.

As illustrated in the screen captures of the flight path above using two different methods of location tracking, there is much that can be done with amateur radio today.

While APRS is a very robust tool, it only allows the user to send data over one uniform frequency.  DMR on the other hand with its advanced routing could allow simultaneous voice and data transmissions on the same frequency.  This is done by using one of the two time slots with different talk groups as covered in a few past HVDN articles on GPS, APRS and DMR you can find in the word cloud on the HVDN Notebook.


Since APRS has laid a solid ground work for spectrum management, coordination, applications and integrations of various technology since its inception, DMR is a fertile field for additional development for location sharing enabled applications.

Here is the raw packet data for both stations during the flight:
Visualized Data 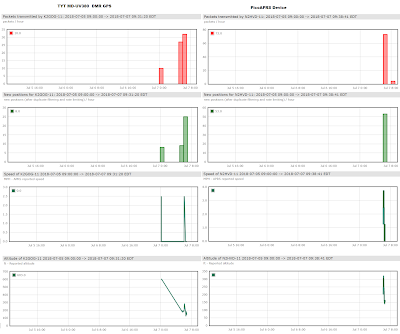