Amateur Satellite Basics: Where, When & What to listen for

Interested in trying something new using your handheld VHF or UHF radio?  How about putting that old scanner to use or using one of those other bands not used in your "all mode/all band" HF radio?  What about using that $20 software defined radio dongle you may have gotten for Christmas?


Consider satellite listening as your next adventure!

This article will only focus on when, where and what to listen for. Later articles will cover transmitting and other related best practices in using the amateur radio satellite constellation for your enjoyment.

What is out there to listen to?

The below chart from the radio amateur satellite corporation or AMSAT for short shows the name of current satellites and general usage patterns. As you can see, there is a lot floating and spinning around Earth that are amateur focused satellites. 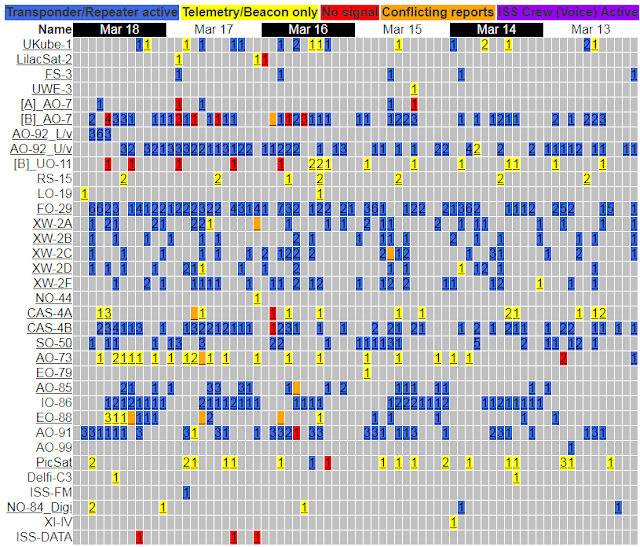 Where to listen for these satellites?

There are sub-bands set aside for satellites and to ensure there is minimal interference from other users in different parts of the world or for those with other interests not related to satellite operations.

In the United States, the ARRL and FCC have negotiated a general band plan along with the ITU and other regulatory bodies such as OFCOM, JARL and many others. Here is a summary taken from the ARRL website for where these special allocations of frequencies exist for satellite only activity.

Have a look for more detail here on the ARRL website: http://www.arrl.org/band-plan

The below frequencies would be a good starting point for just listening, so save them into a radio that you have plenty of left over empty channels in or some other radio you do not use too often.

FM based satellites (down link frequencies)
There are a few others that can be looked up on the AMSAT website and the above are the most easy to listen for currently.  https://www.amsat.org/fm-satellite-frequency-summary/

SSB based satellites (down link frequencies)
These will be in side band mode and may either be USB or LSB depending on what is sent up via up link and is then inverted on the way down. Other SSB or "transponder" satellites can be found here: https://www.amsat.org/two-way-satellites/

Data focused satellites (down link frequencies)
There is a lot more not even touched on in this article such as FalconSat, LilacSat, XW-2 Series and others, but all the above should be easy to hear with even modest antennas such as a 3 element tape measure beam or a simple gain "rubber duck"

How to find when to listen?

There are many applications such as Orbitron, Gpredict and others for PC or MAC based computers, but are not very portable.  For an Android based smart phone, look for "ISS Detector" in the Google Play store. It does much more than just predict when the space station is overhead.

AMSAT has a prediction tool on its website here:  http://www.amsat.org/track/index.php

Also, NY2O has a great website as well for finding when to listen: http://www.n2yo.com/passes/amateur-radio.php

K6KLS has a great website for getting started called http://www.work-sat.com and is worth having a look for more info.

There are also a number of dedicated discussions taking place on Echolink, D-Star and DMR where satellite enthusiasts gather to talk about best practices, so have a look at the HVDN activity calendar to learn more.