Roger Clark posted some great background and tutorial about modifying the executable file for the GD-77 programming software to expand the frequency range of his radio.

I decided to give this a try and have to say I have some mixed feedback, especially after reading a new FAQ found on the Radioddity website that got me excited...


While Roger wanted to use the GD-77 on the Australian UHF CB band for "testing", my goal was twofold:

Before talking about the GD-77, the popular TYT MD-380 has a major limitation for users in the New York Metro area in that it can only receive up to 470 MHz out of the box.  Many users have easily modified a file to permit wider band receive performance to facilitate NYPD and NYFD monitoring. International users have done the same thing for UHF CB band allocations. Here is how to do this on a MD-380G and would also work the same way for the non G version for both UHF and VHF versions as well as the MD-390 series and all the rebadged versions of this radio including the  Retevis RT-3.

Navigate to where your CPS software is installed and locate the "setting.ini" file.  Right click to open it as "edit"  and open it up using Notepad. 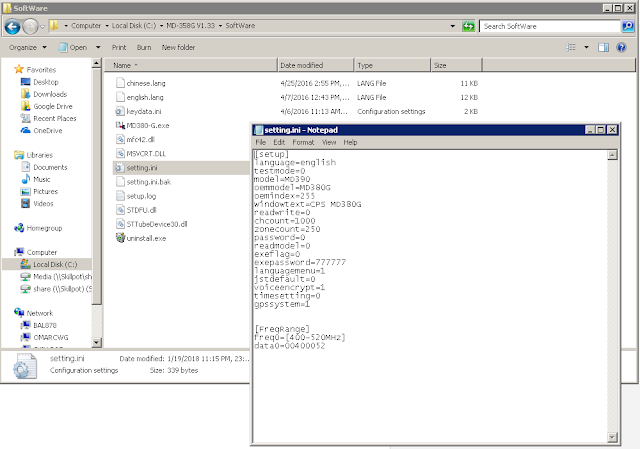 Modifying the area near "[FreqRange]" allows the software to select different versions of your radio and also the frequency range.  The example above shows how I expanded a UHF MD-380G to 400-520 operation. I also deleted out the other radio model options so that I always default to the radio I use and never get the "invalid" model issue. That step is optional if you have VHF and UHF models, you do not want to do that.

Save the file and boot up the software and you should see it worked.  Make your code plug and write to your radio and it should be expanded now.

You can also "shrink" the range if you do not wish to do anything outside the ham bands as well.

Once you do this, you can not go out of band on the radio unless you change the "setting.ini" file again.

Doing the same sort of thing on the GD-77

Its a little more complicated on the GD-77 compared to the MD-380.  Roger has good instructions and a file ready made you can use to implement the modification.  To do what Roger did, you need to know how to recompile executable files, so it may not be for basic computer users. Couple issues I found when using his modified file:

Nice experiment. I put my radio back to normal operation though pretty quick. Would like to see Radioddity introduce a tri-band version much like some of the inexpensive analog only Chinese mobile and handhelds that have become recently available . It be great to see DMR come to 1.25m in the US, especially since the Jumbo Spot and its legitimate ZUM Spot version seem 220 capable.  Future article about this to come in the near future.